This is a story about the power of heart’s intention and how it can set off a chain reaction to create opportunities for hundreds of children potentially helping to change the whole world.

I wanted to share this story because I feel alive telling it and because it speaks about a power we all possess but most are too scared to see. So naturally, this story began in the heart. In the heart of one person. Javier Gamboa has always lived his life by the rules of feeling first, thinking second, and acting third. Sentir, pensar, actuar. Feel, think, act, in that exact order.

About three years ago, he was heading to Ccolccabamba, a small town in the Peruvian Andes, to help his Dad with the harvest of potatoes and quinua. He brought about 20 backpacks filled with supplies for a small school nearby the village,Poma; his parent’s birthplace. But when he arrived he discovered that the school had closed and the children were now walking 2 hours each way to the next village. He decided to meet with the school director in Ccolccabamba to donate the backpacks and supplies. As he was visiting, he noticed the lack of books and, to his surprise, there was no library. Javier, the youngest of seven children, grew up in Lima. His mom, who herself learned to read and write when she was well over 70, always pushed him to study, so he discovered the power of books early on. Javier was fascinated by how they kindled his imagination and let him fly into different worlds and quickly became an avid reader.

So right there, he promised the school of Ccolccabamba that he’d return the following month to bring 1,000 books to open their own library. On his way back to Lima, he questioned how he could possibly keep his promise. How could a single person collect 1,000 books? But when he got to Lima, he started talking to his clients. Javier is a photographer and works with many theaters and dance schools in Lima. He asked them for help to spread the word to see if anyone had books in their homes that they would like to donate. And sure enough, donations started coming in. By the end of the month he had collected 983 books. 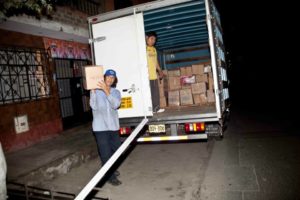 Come June of 2013 and the first books arrived in Ccolccabamba. Javier went from classroom to classroom to connect with the students. He told stories so the children could experience firsthand the importance of books. He also spoke about the power of the heart and about the power of giving and receiving. On his next trip he promised that he will have a backpack with supplies for each student who had read at least one book.

And to his surprise, on his return in September, almost every student had read a book and written a small report. As he entered the school the children lined up with their book reports pinned to the wall next to them. They were so proud of their library and wanted to share with other children. They asked Javier to help to bring more books for other villages. Javier agreed but asked the children in return to go to the schools and talk to the students and teachers the same way he initially had spoken to them. There are 18 districts in the province of Sucre, Ayacucho. In June 2014, Javier returned with 18,000 more books, 1,000 books for each province. I traveled with Javier several times to Ccolccabamba and the surrounding villages. My initial enthusiasm for the project wore off fast. The work is nothing but easy and it takes a constant reminder of the heart to keep going. But these mountains and its children are always calling. There is a different kind of aliveness there that touches my heart and my breath every time I visit. To date, Javier has brought 50,000 books to the villages of Sucre and opened 18 libraries. When the first library in Ccolccabamba was opened, only one student had gone on to university. Today 22 students are studying in universities all over Peru. One of Javier’s dreams is to walk the Inca trail which stretches from Columbia all the way down south to Chile and open libraries in each village along the trail.

At the end of March, we’re heading back to Ayacucho with more books,backpacks, and supplies. Javier is currently looking for help with buying more supplies for almost 500 students. Also, all the libraries are still lacking basic shelves to organize all the books.

If your heart is calling please donate via paypal.me/MichaelaG

If you’re in Peru, or you want to do an international bank transfer, please donate directly to:

Thank you so much for your support!

Here are some videos made shortly after the first library opened: