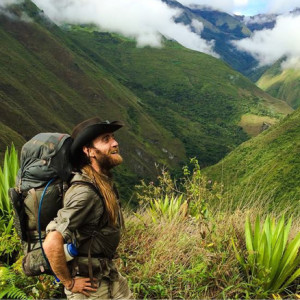 Anthony Bossler grew up in the Midwest and has always had an affinity for nature. Anthony received a BS degree in Acting/Directing for Theatre and Film. It was during his studies that he began to discover more about the unseen spiritual world and our relationship to it as human beings. After graduating, he entered the world of broadcast news for a short time but realized his path ultimately led elsewhere. In 2010, he gave it all up, including most of his possessions and moved to the woods of Maine to work on hiking trails. Being in nature 24/7 changed him along with learning about sustainable farming and simple living. After that he was hooked. He’s been living out of a tent and backpack ever since; working and playing in the deserts of the Southwest US, the tropics of Hawaii, the forests of the Pacific Northwest and Alaska. The stars aligned and his journey eventually found him at the Paititi Institute. Prior to Paititi, he was working for a nonprofit that teaches youth and young adults stewardship of the environment, leadership and communal living, and outdoor skills. He combines his outdoor living skills, trail building, wilderness first responder, and jack of all trades talents to help out at Paititi. Ever a consummate student of the universe and a calm, patient presence; he can be found smiling, listening, loving, and wandering the mountains while watching the hummingbirds dance.